Its end of summer and the monsoon had already set. I was eagerly waiting for the monsoon treks to pop out of the list of BTC events and this trek happened. Since it was a 1-day trek, I expected it to be a night trek, but ooohh! It was a day trek after a long gap. Didn't think for even a minute and asked my friends but they gave multiple reasons as usual and ditched me. My next question was if I should go alone. After a long struggle with my mind, I went and hit the register button. 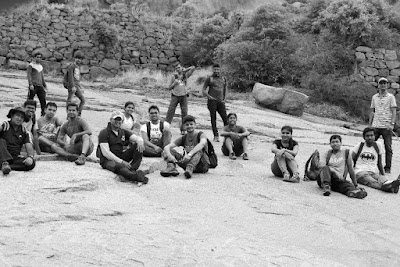 The shortlists were released and my name was in the list! I didn't know if I should be happy or sad. With mixed emotions, I made up my mind to go and have fun. I had no clue about the organisers - Hiren and Gaurav and I couldn't recognise any other names in the list as well. 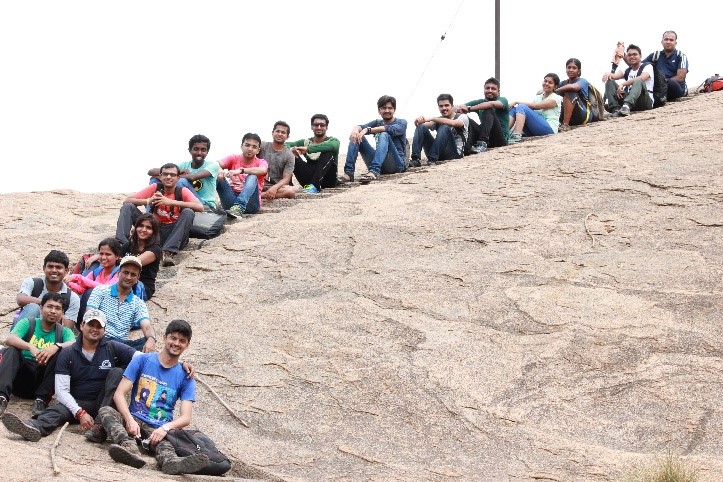 It was Saturday morning and I went for the jog in Cubbon Park organised by the same guys. Uff! Now I know two people in tomorrow's day trek   Got up at 5AM on Sunday and got ready proactively for my first solo mission. As usual, I didn't inform my parents (sorry dad and mom!) because I knew they will be super scared and now i am going alone as well. Reached the metro at 6.15 and met Hiren. It was very cloudy and we knew that we were going to have difficult times in the trek. We arrived at the Shanthala silk house too early and I met a familiar face - Divya. Now I know 3 people  Boarded into our van and waited for everyone to join us.

We started at 7.15AM and had the typical BTC style introduction. Fun and laughter started to kick in as Sailesh brought beach inside the van and Divya became dhaniya. Following the intro session, we continued with dumbsie and halted in Magadi town for breakfast. We were given a variety of options - idly & vada, masala dosa, Puri and anything in the menu followed by coffee, tea and badam milk. With loaded boxes of pulao for lunch, we got back into the van and set to explore the hutridurga hill. Continued with dumbsie and halted at the starting point of our trek. 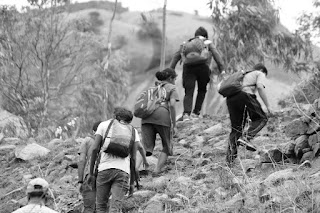 The weather was amazing. It was neither sunny nor raining. Hoping that we would get back safely, we started our climb. Initially we walked in the roads and took a left turn into the mud road. The real trek began and we climbed across boulders to reach a steep rocky surface. Even though there were steps carved in the rocks, ascend was very difficult. It drained out our energy, yet the group was amazing that we took lesser breaks and reached the peak easily. We halted at multiple points and took pictures. Thanks Sandeep, for clicking those candid shots! We blindly trusted the organisers who assured us of a small swimming area next to the temple, which was a big mistake. All we found was the dirtiest pit!

Somehow I became the silent person in the group (thank you Vikram for that name!) To my besties who didn't turn up for the trek - calm down people, they don't know the real me.  The main reason for the silence was that I didn't know the common language "Hindi". Everyone but me, in the group knew it   yet, the group pulled my leg and made me sing. Yeeah! They tolerated my bad singing as well. Unlike me, the group had amazing singers. Gaurav went into his love mood and brought out the singer in him. While the Hindi songs were flying in open air at the top of the hill, the monkeys which were wandering around during our lunch time disappeared into nowhere. Sorry guys, that was something I observed and I don't intend to hurt anyone. Just kidding   Also, we had a mini birthday celebration for Nikila as well. 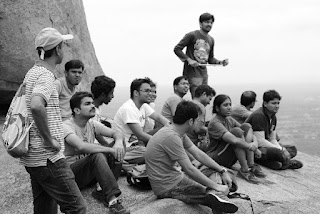 It was 3PM and we started our descent. Gaurav was not able to stop his musical raagas and he kept singing all the way down, which inspired everyone and all started to sing. Even though I was not able to join them in singing, I had fun listening to them. Reached the base super quickly in 45 mins approximately and boarded our van. I hardly felt tired because of the enthusiastic people.
Bidding goodbye to the peak, we headed back to Bengaluru. While Gaurav explained the most useless trick to identify fake currency note, Parth was making weird jokes. We halted for sugarcane juice and snacks in the middle. As I keep writing this blog, the guys in the van are singing songs crazily at the top of their voice. Definitely I was sitting in the middle of mad people, but loved every bit of enthusiasm that they showered to everyone.

Another amazing trek by BTC. Thanks to the entire group for not letting me alone and lending your helping hand when I needed one. Special thanks to Hiren and Gaurav for taking the extra pain in organising it and giving us another memory to save for the future. Oops! I forgot to mention – thanks to the weather! The weather was good. Thanks Sandeep for the pics! 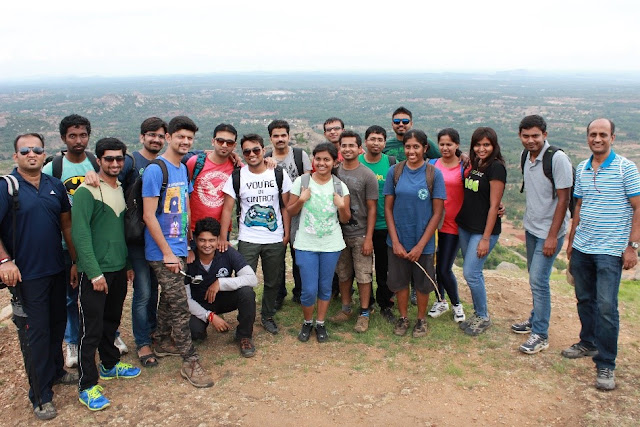